However, in some circumstances, there are occasions when you have an opportunity that needs a large number of volunteers and/or you are working with large teams, often corporate teams, who want to 'reserve' space for a team of 25 people - but may not know who those people may be yet.  In those scenarios, you may want to allow a team captain to sign up a team of themselves, perhaps 4 or 5 people whose names they know and have added to the team so far, and maybe also 'reserve' an additional 20 slots for team members yet to be named.

With this new feature (if enabled by your system adminitrator) - its possible for you selectively choose Volunteer Events, Volunteer Opportunities, or individual occurrences, where you opt to ALLOW a team captain to reserve slots for unnamed team members, as part of the signup process.   Here's how it works!

Indicate any event, volunteer opportunity, or occurrence, where you wish to allow team captains to reserve anonymous slots

There is a new field that your administrator can add to the Volunteer Event, Volunteer Opportunity, and/or Occurrence page layout.   (See this article for instructions on adding this field).  The new field is called "Allow Reservation of Anonymous Slots".

When checked as true in a Volunteer Event, All Volunteer Opportunities and their occurrences will allow team captains to reserve anonymous slots when signing up their team.

When checked as true in a Volunteer Opportunity, all occurrences of that opportunity will allow team captains to reserve anonymous slots when signing up their team.

When checked true in an occurrence -- that occurrence of the opportunity will allow team captains to reserve anonymous slots when signing up their team. 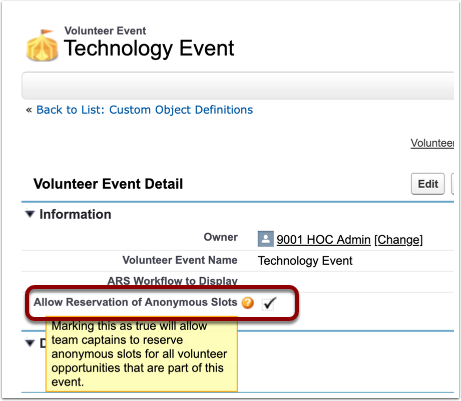 It is available in all three objects so that you can quickly determine how granularly you wish to deploy this option.  If, for example, you turn it on at the volunteer opportunity level, you do not need to set this value for each individual occurrence.  The Volunteer Opportunity setting will influence all the occurrences associated with that opportunity, even though the value of the field in the individual occurrences will not be changed.

What a team captain sees when signing up their team, with this setting 'on'

In this example, Kenny Kiosk has formed a team "Kenny Cares".   Right now he only knows two team members, Carla and Sally, but he plans to have a team of 10 members eventually, and wishes to reserve an additional 7 slots for team members he doesn't have the names for yet.

During team signup, he signs up Carla and Sally and himself -- but now sees a spot to enter "Additional Unnamed Team Members".  And he sets that to 7.  This will reserve 10 of the available slots for this opportunity.   (He can see how many spots are available so that he won't accidently reserve more space than is available.  (If he tried to sign up more spaces than are available - he'll receive an error message and be able to correct the number of slots he's reserving. 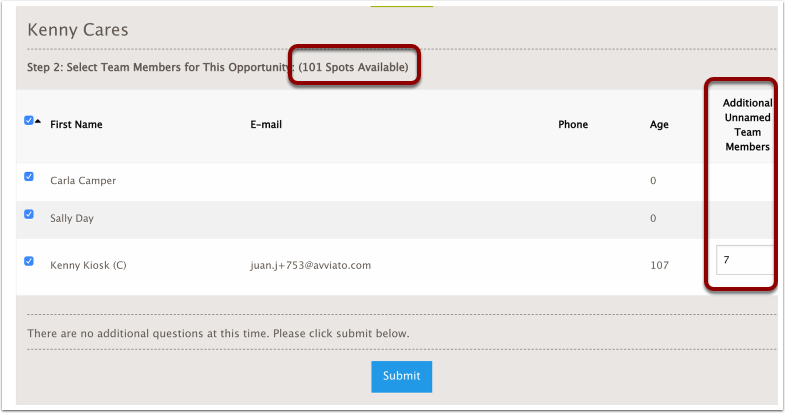 When he clicks submit, he's asked to confirm and given a message about how many slots he's reserving: 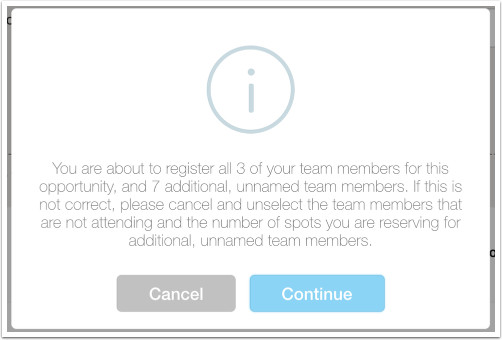 When he clicks continue -- the success message will reflect what he's done, and display any messages regarding any named team members who did not meet the requirements for the opportunity:

On the back end, where are the anonymous volunteers tracked?

How does a captain edit the number of guest slots they are holding?

After signing up the team.  The captain can, as always, add additional team members to their team. (by going to My Account / My Teams / Manage Teams / Add New Members).  After adding new team members (perhaps naming some of the anonymous team members), they can then click on the "Participants" link and edit the number of anonymous slots being held.

For example, Kenny now goes to 'manage team' and adds a new team member, Brenda Scotch.   He then clicks on the participants link to update his participating team members.

As before, he can add additional team members to the opportunity (space allowing), and/or remove team members.  But now he can also edit the number of anonymous slots he's holding.  So in this case he adds Brenda and lowers his 'unnamed team members' from 7 to 6. 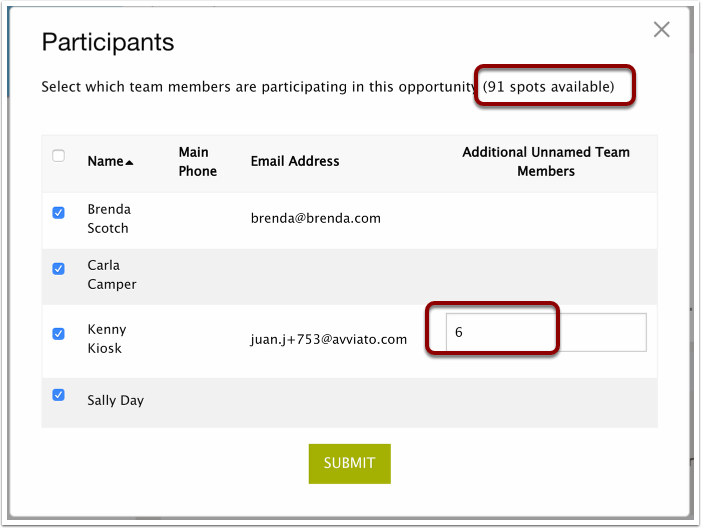 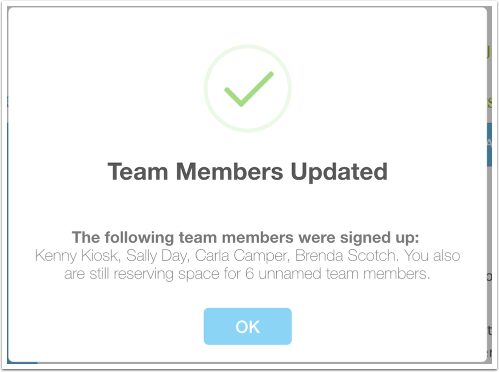 IN this way - Kenny can update the number of 'reserved spaces for unnamed team members' at any time up until the opportunity takes place.

When the opportunity takes place, the person checking in volunteers can note how many of the unnamed team members actually attended, and update the 'guest volunteer' count in the captain's connection.

See this article for information on how system administrators can add these new fields if you want to start using this feature.

See this article for information on how unnamed team members are handled IF you are using the check-in kiosk to check in teams.