How Teams and Guest Configurations Work Together

1) Additional team members show up on the day of the event and no connection was made for them, or

2) You have allowed team captains to reserve space for unnamed team members, and they have guest spaces associated with their existing connection. (See this article for how this optional feature works and can be enabled.)

This article describes how team check-in will work if guest check-in is allowed.  This varies depending on the guest configuration you have enabled for the kiosk.

If they are only checking in themselves and named team members - this number can remain at 0.  In the example below, the captain, Kenny Kiosk, is checking in Carla and Sally (who he signed up previously), not checking in Brenda (who has decided not to show up), and has 3 additional members of his team with him, who he had not previously registered or named.

Clicking on 'submit' will check in himself and add 3 guest connections to his check-in, as well as checking in Carla and Sally.   (FYI: If Brenda shows up later, she'll still be able to check herself in) 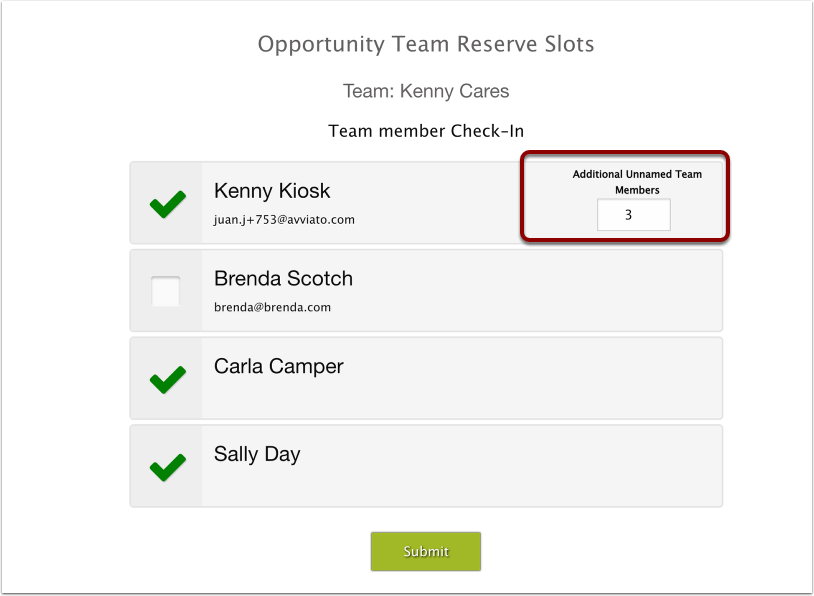 In this configuration of guest check-in - the general intent is to capture the name and email of every guest -- allowing them to create an account. So when this configuration is used in conjunction with teams, the following takes place during check-in.

1) When the team captain checks in, they can only check-in named team members they have signed up previously. Any 'guest volunteer' slots associated with their connection will be reset to 0.    Why?  Because any unnamed volunteer will be asked to check themselves in, as at that time will become a 'named volunteer'  There will be no "additional unnamed team members" in this setting - because everyone who doesn't have an existing connection will be creating an account for themselves.   By resetting the guest connections to 0, we avoid double counting the team members who attended.

2). When a volunteer who doesn't have a connection checks in, they'll first be asked which opportunity they are checking in for, they'll then be asked "Are you part of a team registered for this opportunity?" 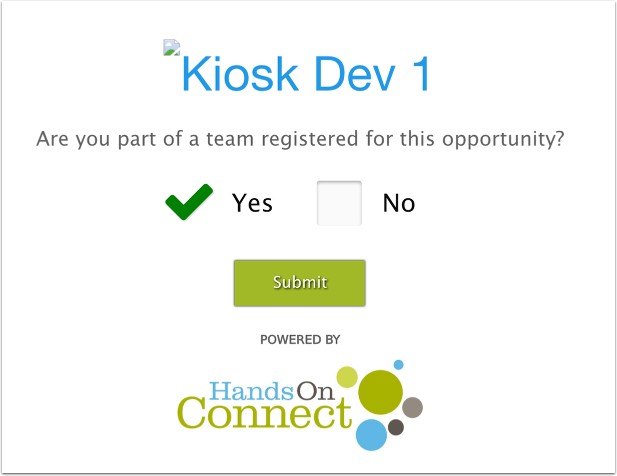 If they say no, they'll be checked in as an individual guest volunteer and create an account.

However in this case, there isn't a connection for Tom Scott. So he'll be presented with the following screen: 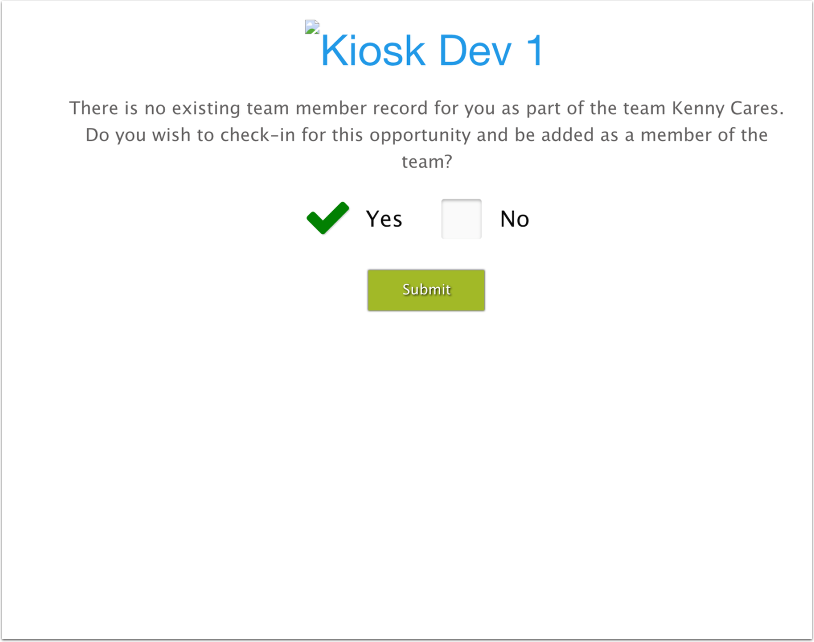 If the person says Yes to this dialog - they are taken to the same 'quick registration' page any guest would be taken to, however, in addition to creating a contact and a connection for them, a team member record is also created for them as part of that team, and their connection shows the association with the team.

The next time the team captain wishes to sign-up team members for an opportunity, they'll be able to access this person as a named member of the team. 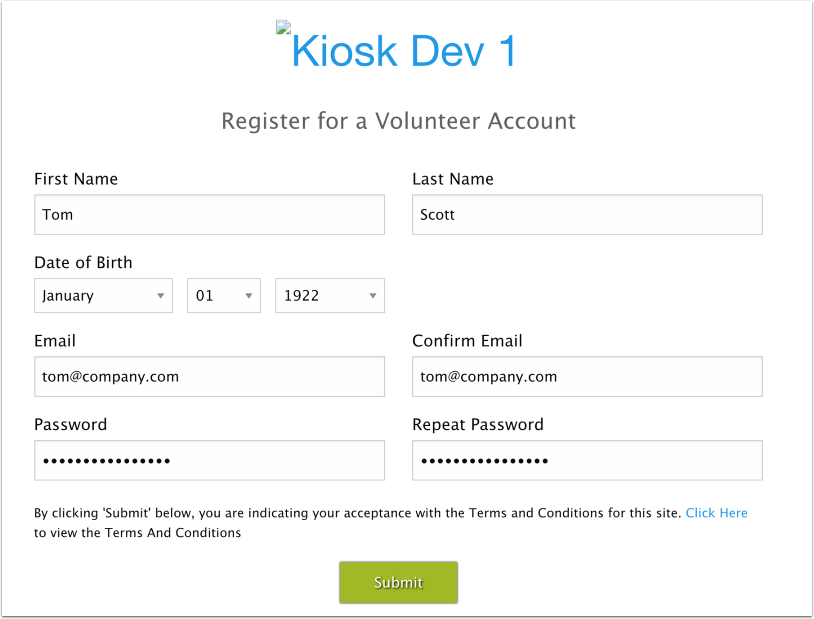 They will now see a confirmation that they have checked in as part of their team! 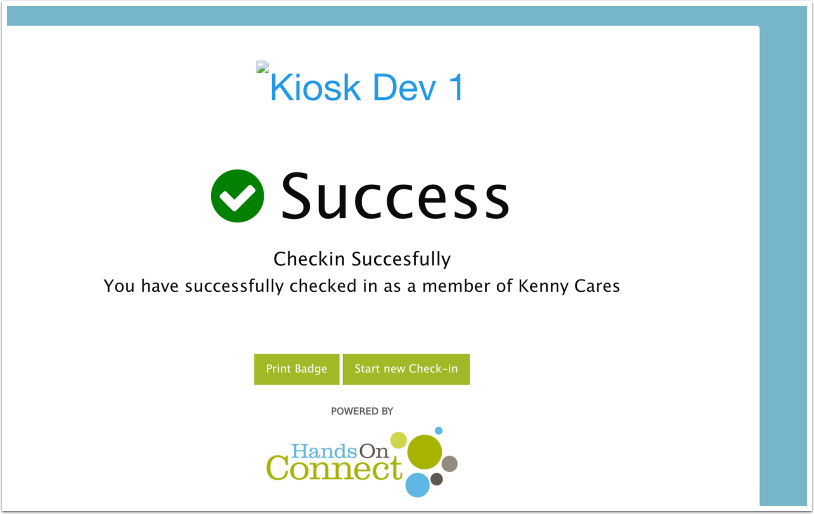 For most HOC users who are allowing both team check-in and requiring guest volunteers to register, we assume that its value-added that a registering volunteer can affiliate themselves with their team. That is the default configuration of this option.

That said -- if for any reason you do not want people who say they are part of a team, to check-in as part of that team - you can request that the ability to register as part of an existing team be turned off.

In that scenario, a person who says they are part of a team and tries to check in, will receive a message saying "Sorry, you are not part of this team. Please see your team captain or opportunity leader, or sign in as an individual volunteer today rather than as a member of this team".

The volunteer will not be able to check in as part of the team, and it will be up to the team captain or the opportunity coordinator to associate that person with the team in the future.

Guest Check-in Configuration 3 is not compatible with checking in teams.   So if teams are enabled and you wish guests to be able to check-in, use configuration 2 or 4 as described above.