Only enable advanced features when you have a specific business need to use these advanced functionalities - and enable them only for profiles that have been trained to use them.  (You can enable them for System Administrators only if desired).

The ability to group occurrences can be made available to system admin and staff users.  It is not a feature that can be enabled in the sharing portal.  Click here for details on how to enable grouped occurrences in your instance of HandsOn Connect.

In Lightning, you'll find it here: 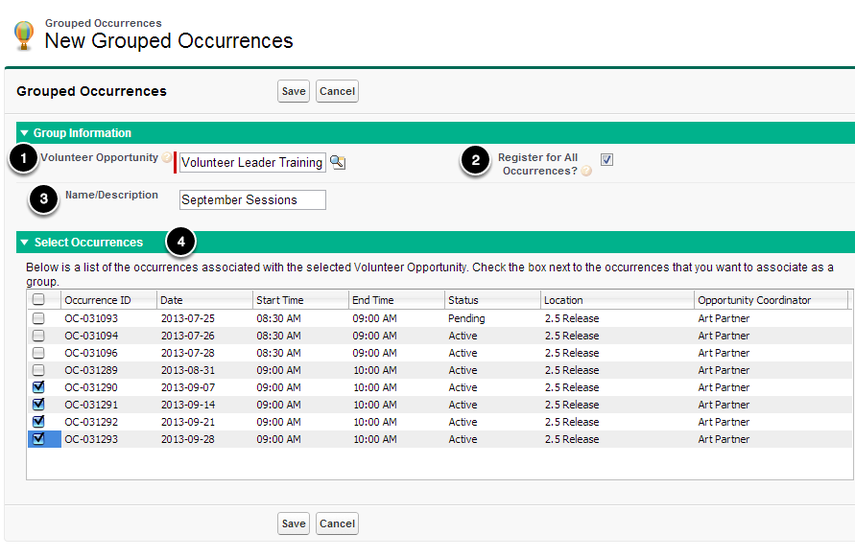 On the Grouped Occurrence page, you have the following options:

1)  Volunteer Opportunity - Will be pre-populated with the name of the opportunity you came from.

3) Name/Description - This is an optional text field to allow you to define the grouping in case you have multiple grouped occurrences with a single volunteer opportunity.

4) Select Occurrences -  Occurrences can only be part of 1 grouped occurrence series.  The chart that is displayed shows all the occurrences associated with the selected Volunteer Opportunity.  Column headers can be clicked to resort the occurrences based on any of the columns in case you want to group them based on location or opportunity coordinator.

You must select at least 2 occurrences to create a grouped occurrence record.

Once you have selected the Occurrences and other fields, click Save.

As a matter of best practices, its unlikely that it makes sense to require a volunteer to sign up for more than 20 occurrences at a time. Their plans are likely to change and then they would have to remove themselves from many of the occurrences they previously signed up for. 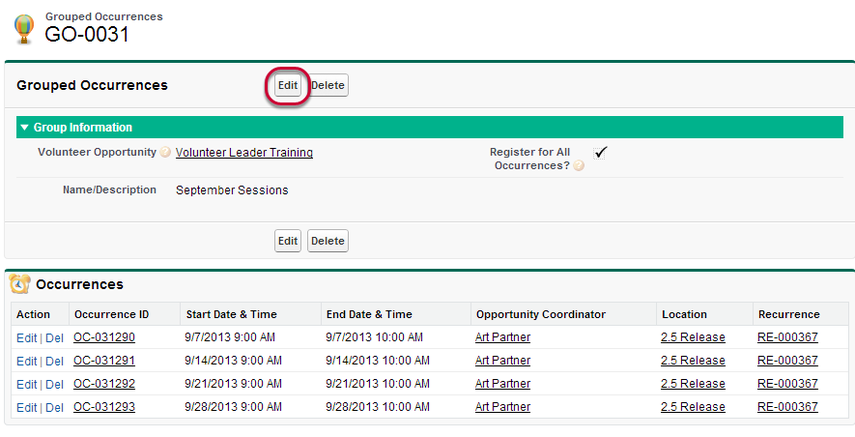 Once created the Grouped Occurrence record has a related list of the occurrences in the group.  You can also Edit the grouped occurrence to remove or add occurrences, change the description, or "Register for All Occurrences?" checkbox.

Grouped Occurrences on the Public Site (Register for All Occurrences? = Unchecked) 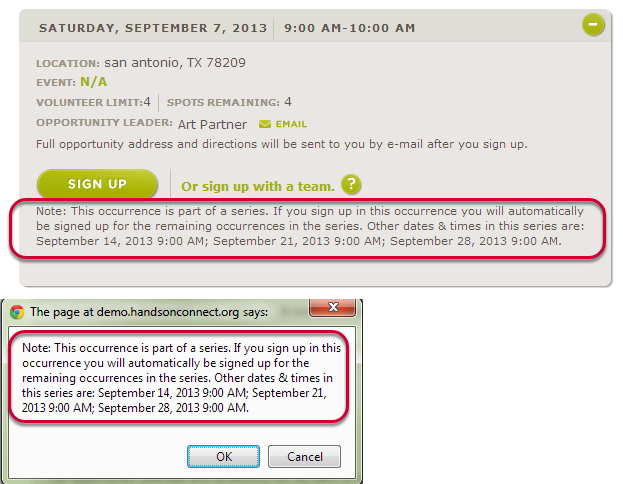 Occurrences that are part of a Grouped Occurrence have a NOTE added to the Sign up/ Express Interest box as well as a pop-up message letting the volunteer know that they are registering for a series and all the dates of the series.

When Register for All Occurrences? is unchecked then the same note appears for all the occurrences in the series with the dates that are remaining.

For example in the image above, the series is September 7, 14, 21, and 28.  If a volunteer were to click on the September 21 occurrence to sign up they would be signing up for the 21 & 28, but not the 7 & 14 since those take place prior to the first occurrence of which they were registering and registering for all is not required.

Grouped Occurrences on the Public Site (Register for All Occurrences? = Checked) 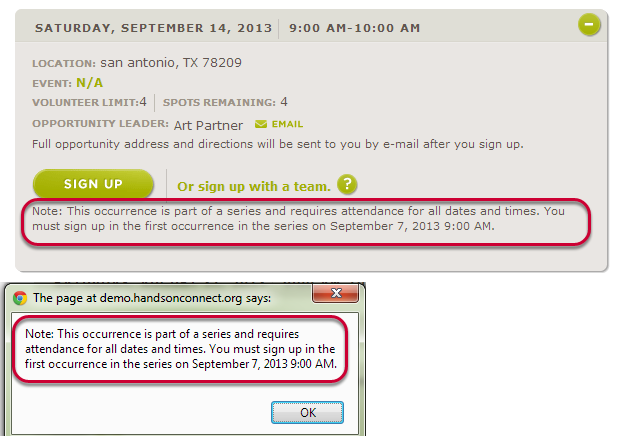 When Register for All Occurrences? is checked, then volunteers are only able to sign-up for the entire series.  Occurrences that are part of the series, but not the first have a NOTE letting the volunteer that they must sign up for the first occurrence in the series and provides them the date.  A pop-up message also appears in case they don't see the Note.

Be aware that its possible for someone to remove themselves from one or more occurrences after they have been signed up for the entire group.  This creates the following possible concern:

System Admins that wish to enable this functionality can follow the steps at this link.