Since the 3.0.7.0 release a number of incremental improvements were made including improvements to sites using internationalization and multiple languages, improvements to business page search results, and menu performance on some site designs. A number of short term bugs were also fixed.

In the 3.0.7.1 release (and its incremental releases since Sept 6), a number of performance improvements have been made, and some typos in error messages have been corrected.   Here are some of the most visible improvements in the release.

In a recent release we improved the security and process of sending emails from the public site to an occurrence's opportunity leader.  We've improved the email sent even further by now providing both the email of the sender AND making that the 'reply-to' address for easy response.

We've also added a link to the volunteer opportunity it was sent from along with the name of the opportunity and the occurrence date and time so the leader will know which occurrence the inquiry is about! 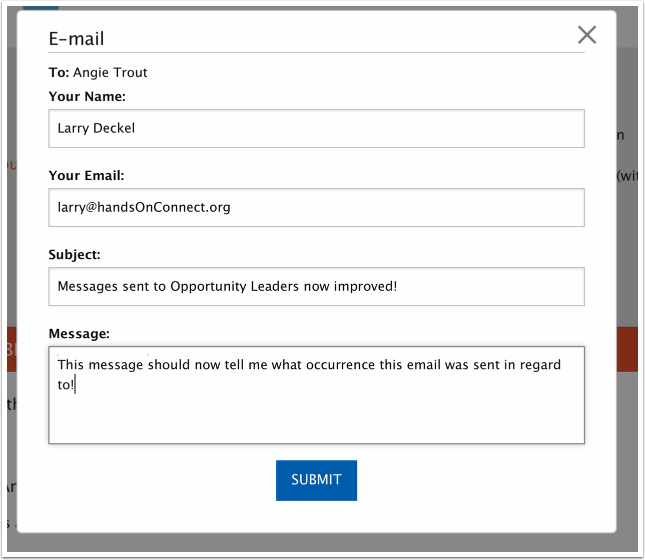 And here is the email that Angie receives:

Methods have been added to the sharing portal to handle requests for data when the number of returned records would be greater than 1000 (the API limit for a request from Salesforce).   It's now possible for us to return any shared records through a "Load More Results" link which appears if more than 1000 records are called through search or filters:

Bug Fix: Inability to sign up for Individually Scheduled Opportunity with Schedule for today's date (HOC3-7835)

If a volunteer tried to sign up for an ISO with Schedule that was expecting volunteer's that day - they received an error message saying the day was not a valid date.   This has been corrected.  Volunteers can now express interest in an ISO opportunity for that day if the schedule allows it!

Note:  The connection would still be in pending status, and its possible that the Opportunity Coordinator won't be able to confirm the connection in real time -- but this makes it possible for a connection to be created via the public site -- and, if you are using the check-in kiosk, that pending connection can be checked in for as soon as its been created.

The pilot program for creating alternate rules for creating teams as been moved to Beta status.  In addition to previously announced fields that could be hidden or made required - its now possible to require or remove the fields "Team Description" and "Company/Group Affiliation"

See this updated article for full details on the issues regarding requesting changes to HOC's default rules regarding creating teams.