Be sure to join us for the roadmap previews in September to find out more about HOC 3.0

These issues have been fixed, but require administrative action on your part if you want to control the image appearing on Facebook when someone types your URL into a facebook post.

(NOTE:  These instructions only apply to HOC 2.0 users).   See below for HOC 3.0 instructions: 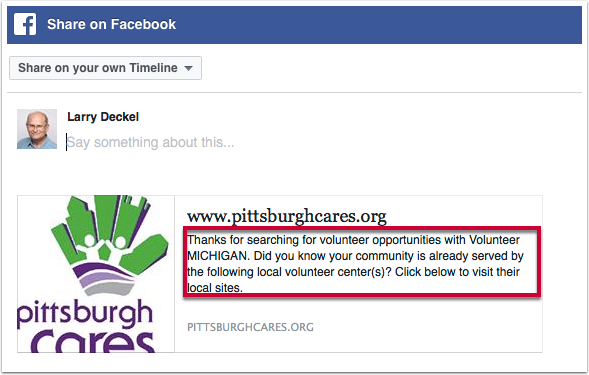 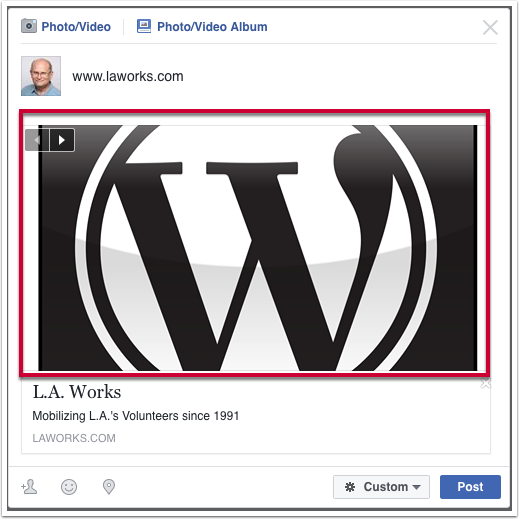 Go to Control Panel / Site Configuration and make sure that the field "Site Sub Header Name" has text in it.  This is the text that appears when someone types your URL into facebook.  Do not leave it blank.   (Keep in mind this text also appears on your home page as your site sub header (unless you are using the banner logo).

2) Populate the Syndication Logo in control panel with the image you wish to have appear on Facebook.

On this same page, scroll down to "Site Images & Document Upload" and upload the image you wish to have appear on facebook to the file "Syndication Logo"

For Facebook compatibility, that image must be at least 200 x 200. Use images that are at least 1200 x 630 pixels for the best display on high resolution devices. At the minimum, you should use images that are 600 x 315 pixels to display link page posts with larger images. Images can be up to 8MB in size. Try to keep your images as close to 1.91:1 aspect ratio as possible to display the full image in News Feed without any cropping. If your image is smaller than 600 x 315 px, it will still display in the link page post, but the size will be much smaller.

(Note: You can safely replace the syndication logo that was originally in place here.  It was 100 x 100 and too small for Facebook to pick up and use.)

3) Have Facebook 'scrape' your site again to pick up these changes:

Once you've uploaded the new logo into HOC, Go to: https://developers.facebook.com/tools/debug/ Enter your site URL, and click on ‘Debug” . Then click on “Scrape Again” to get Facebook to start using the new logo. 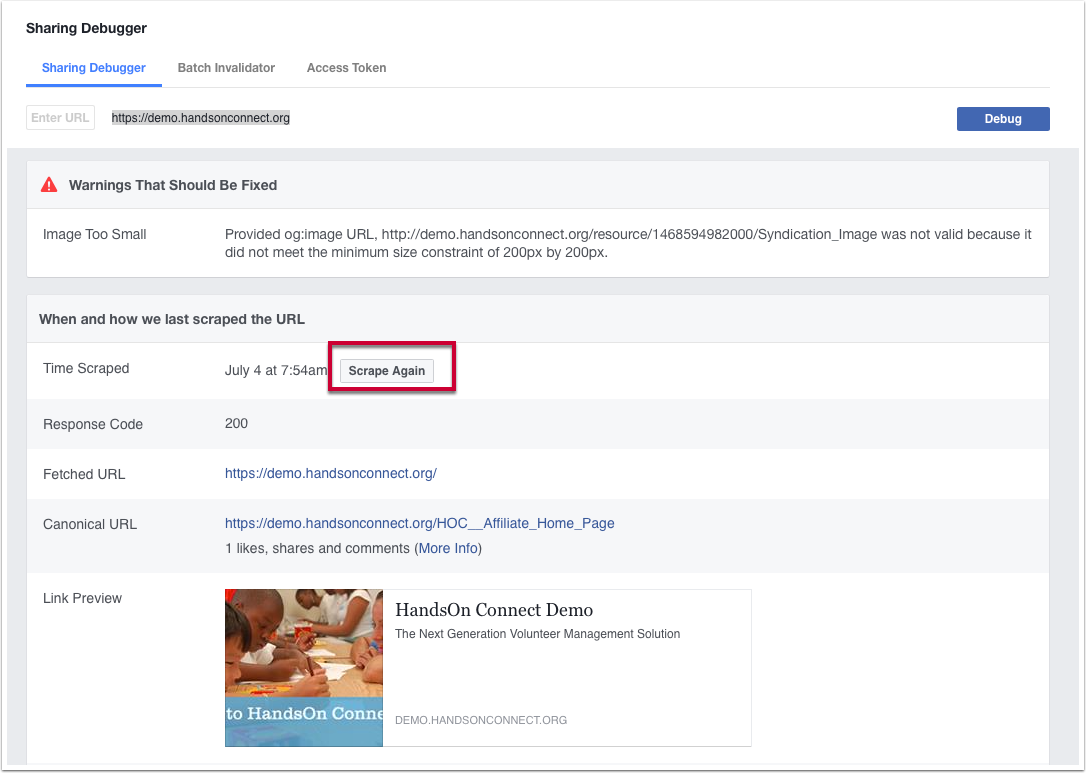 To Update your site name and site image for syndication for 3.0 do the following:

2)  Go into Pages and search for the page called /search  .  This is a special page that just has the search engine optimization features. It does not have any content:

3)  choose the meta-tag og:Image and enter the URL of the image.  Click on "Add Meta"

4) choose the meta-tag og:site  and put in the name of your site. 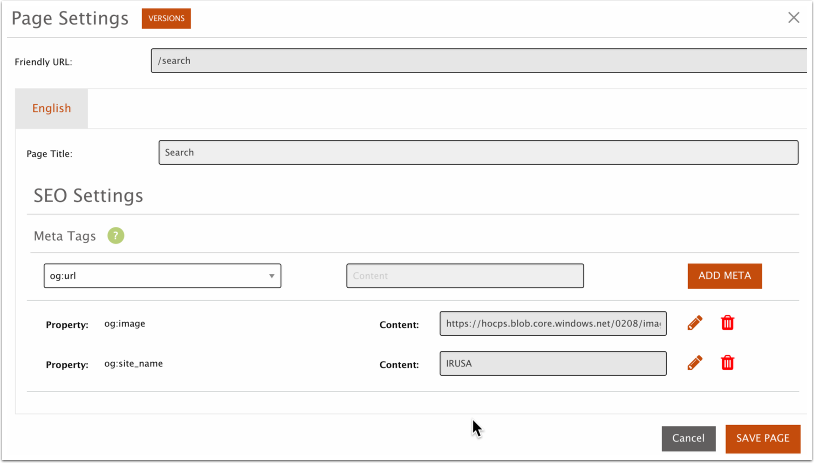 It's been one of the most elusive bugs in the system, but our developers have finally sent this bug packing!  For reasons that have long eluded us, the summary field "Guest Hours Served" in the occurrence record sometimes showed double the correct hours for guest volunteers. As a result, the "Total Hours Served" field was also incorrect, as it added the Volunteer Hours Served and the Guest Hours Served to produce its total.  This seemed to occur when editing connections directly, but not via the connections grid in the occurrence record.  But this resulted in a number that was a combination of doubled hours and undoubled hours.  Ugh!

Well, those days are over, and now these fields will  show correct results for all managed connections.  In addition to identifying and correcting the bugs that were causing the doubling, we'll also be going into your instance of HandsOn Connect and rerunning all the calculations, thereby cleaning up the data to update these fields to their proper values. There's no action you need to take, though for those of you who had, at our suggestion, removed these funky fields from your occurrence page layout, you can now put them back in if you like.

We still recommend, as we have in the past, that you calculate hours by using the hour fields in the individual connection records -- but if you have a need to, you'll now once again be able to use these summary fields for reports on hours related to occurrences and rely on their values in the occurrence record

Fixed: Guest Volunteer Hours not calculating for Date and Time Specific Opportunities when administratively creating connections for past dates(HOC-660) 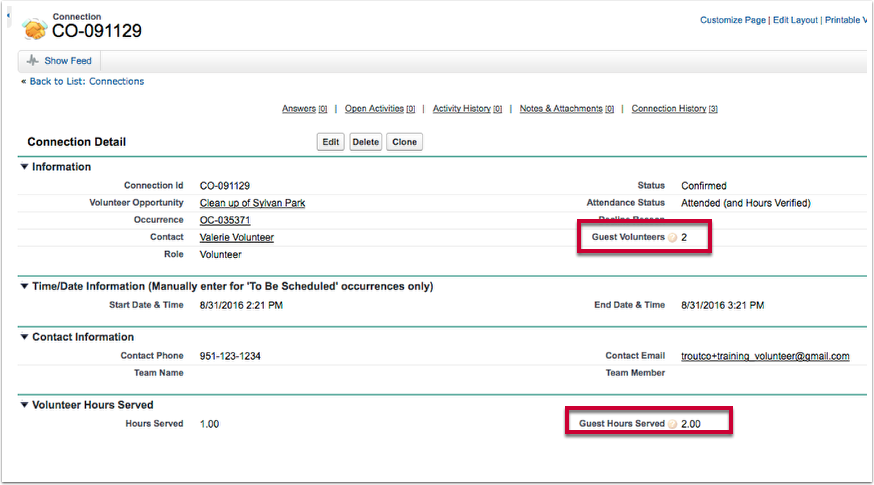 As you already know, the tracking of self-reported volunteer hours is done in a special volunteer opportunity called "Self-Reported Volunteer Hours" that is created for each organization when new organizations are added to your data.  The triggers that automatically create these opportunities have been significantly improved in two ways:

1) The trigger now only creates self-reported volunteer opportunities for accounts of record type 'nonprofit'.   Previously, all organizations were having self-reported opportunities associated with them (corporations for example), which was a wasteful use of data space (since you can only self-report service for active nonprofit partners).

This change prepares the way for the following new feature:

For the last 6 years, HandsOn Connect has run on what's called the 'bucket account' model.  Each new volunteer is assigned to the bucket organization we call "Individual". This has been standard practice for nonprofits for many years.

For those of you wishing to add the NonProfit Starter Pack version 3to Salesforce, so that you can manage donations and other financial transactions - we have detailed instructions on installing the NPSP for the bucket model and configuring it to work smoothly with HandsOn Connect. We also offer a paid option via the HandsOn Connect AddOn Store for us to do the installation and configuration for you, as well as train you on the NPSP.

With the release of NPSP 3 - the Salesforce Foundation has stated a preference for nonprofit organizations to use the new "Household Account Model."  In this model, a 'household account' is created for each contact, instead of using a separate household object (as they did in the past under the bucket model).

It is not recommended or necessary for those of you already on the bucket mode to switch account models. An account model is usually set at the time an organization first starts using Salesforce and changing from one account model to another is a complex and time consuming process. However, after migrating to HOC 3.0 in the future, if you also wish to have your data updated and make the switch from bucket model to household account model, we will offer this as a paid data migration option. 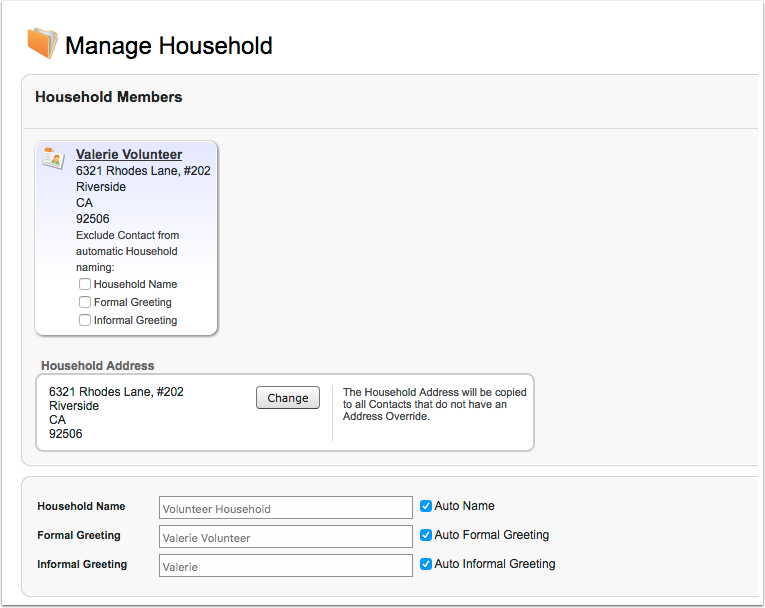 We get many requests from HandsOn Network affiliate asking if they can make changes to picklist values such as "Impact Area" "Gender" "Interests" in their HandsOn Connect instance.  Many picklists have been marked as "DO NOT EDIT" on the HandsOn Connect Complete Field List.   Some are marked do not edit, because the values are tied to coded system functionality, however many others have been marked 'DO NOT EDIT" due to the original data requirements for annual affiliate reporting to the HandsOn Network.

Many of the items originally required by the HandsOn Network are no longer part of annual affiliate reporting, and after discussion with Points of Light we've gotten permission to allow changes to be made to many more picklists so that HandsOn Connect can better reflect your local needs.

The following picklists (formerly restricted) are now allowed to be edited to meet your local business practices:

The ability to "create multiple connections" for Individual Scheduled Opportunities has worked fine for internal users, but due to sharing issues with contacts in the 2.0 premium partner portal, Partner Organizations couldn't always administratively schedule the volunteers for ISOs.

This has been corrected, and now partners can look up any of their contacts and administratively schedule them for multiple connections for their ISO opportunities.  Individually Scheduled Opportunities continue to improve for partners.  Be sure to encourage your partner organizations to start using ISOs instead of TBS opportunities for their opportunities that are not date and time specific!

It was reported that the 'saved search' functionality that theoretically made it possible to have multiple 'saved' views of your opportunity calendar, did not work once you moved the calendar forward by one or more months. At that point, the filters were being lost and the unfiltered calendar returned for subsequent months.

This has been corrected - and saved search filters for calendars will be maintained as you move from month to month. 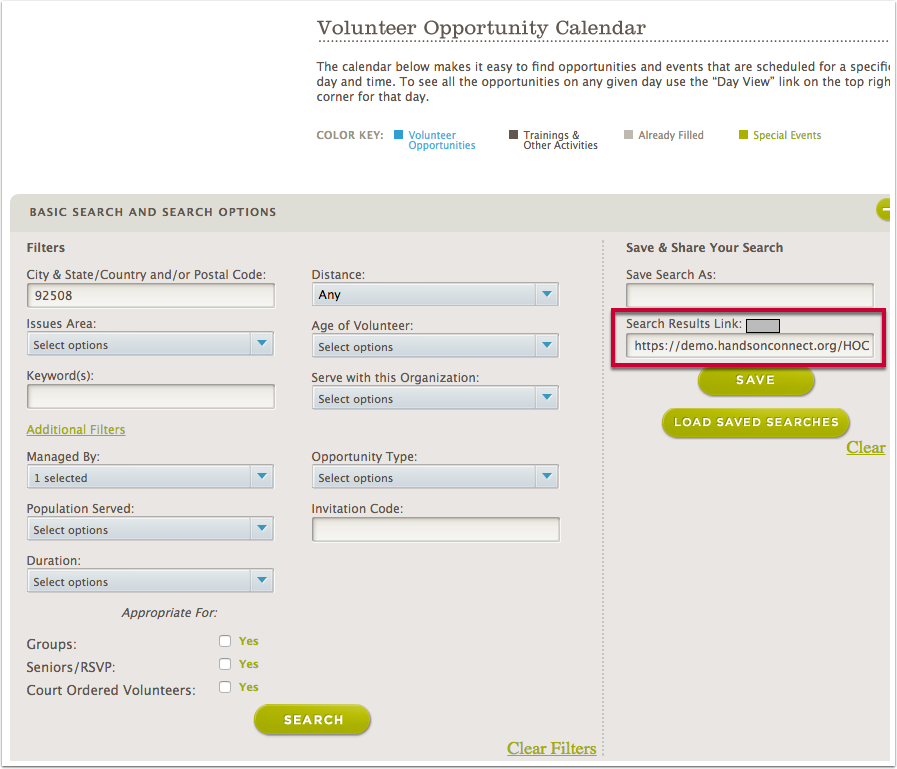 Some change in the Salesforce Spring '16 release caused a problem with creating Volunteer Opportunity custom questions of type = picklist.  These questions were not appearing on the public site due to a missing bit of punctuation that this VisualForce page normally automates.   This issue has been corrected. 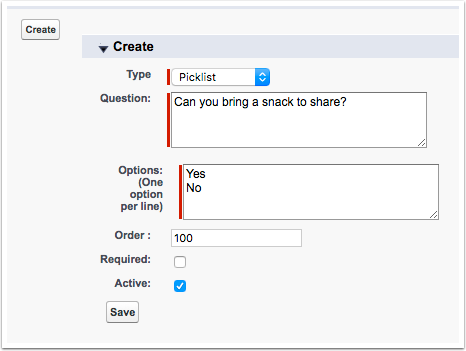 An additional item related to registration questions of type picklist -- they were appearing on the public site with the picklist values displaying over on the right edge of the page.  This too has been fixed!