The HOC3 release notes are changes made on the front end and sharing portal of HOC.  And the 'month-based' releases that update the icon in SF - are changes made to the HOC package in Salesforce.  For some things, changes have to be made in both parts of the system before a new feature or improvement is fully implemented.  Got it?  :-)

Here are some of the goodies in this month's release for the public site and sharing portal - including two new, much requested improvements for teams and partners using the sharing portal!

With these release we've added the long-requested ability for a team captain to edit info on their existing team members.

You can edit the name, email address or phone number of a team member, as long as that contact has not already registered and created an account in HandsOn Connect.  (i.e.  if the contact is in status "Pending (team Registration)" they can be edited.

If the team member's contact is in status "Registered" - the team captain CANNOT edit the team members info.  (This is so that a team captain doesn't accidentally lock a registered volunteer out of their account by changing their email address / user name / (login).  Was a team member has their own account in HOC - only that person can edit their own personal information.

To edit members or your existing teams, go to My Account / My teams and choose your team.  Click on the "Manage Team" button:

You will see 'edit' icons in the Name, Email and Phone columns for any team members who are still in Pending (team registration) status.  No icons will be available to edit team members who have already registered and have an active log in.  In this example, we can edit info for Fran Fish and Suzie Kay, but not Vanessa Volunteer who already has an active account in HandsOn Connect. 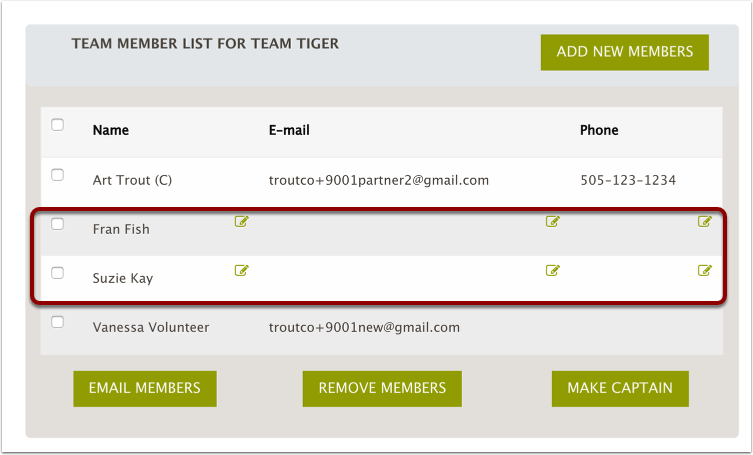 After editing info on the page --- click the SAVE button to save your changes! 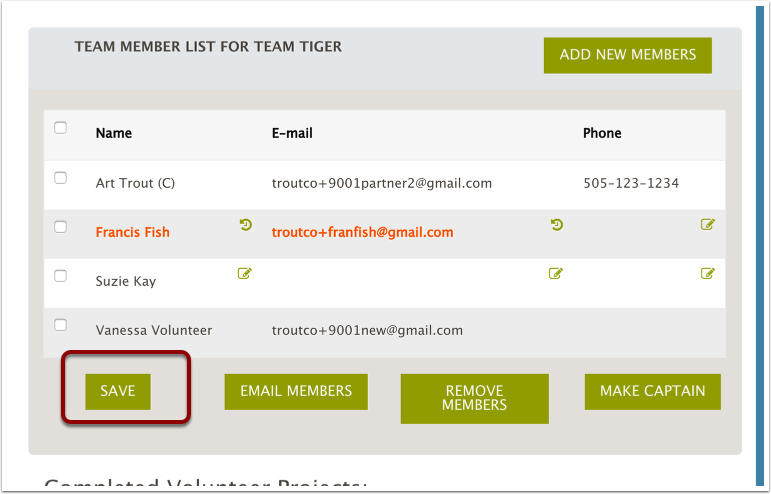 This now makes it possible for team captains who created teams with anonymous names like "Volunteer 1" and "Volunteer 2" to eventually give real names to those anonymous team members, and enter their email and/or phone number as well!

Previously, if a partner organization was set for 'auto-approve' the volunteer opportunity was automatically placed in active status, however the partner then had to go to each created occurrence, and click on a "publish' link to publish that specific occurrence.

We've had many, many requests saying that they simply want to grant some of their partners the right to create an opportunity and its occurrence(s) and have them all immediately published.   And that's what's been done!

No need to click on 'publish' for each occurrence.  If partner has auto-approval on - any opportunity they create is published, and any/all occurrences are automatically in posting status:  "This is approved and published for volunteers to sign-up."

Auto approve is now truly 'auto-approve' -- rather than 'permission to self-publish". :-)

To allow partners to auto-approve - just go to their organization record and place a check-mark on "Auto-Approve Opportunity".

If you want to continue to review all new opportunities and 'approve' them in SF before publishing -- leave Auto Approve Opportunity turned off.

The CMS menu item in the AddOns section that had been named "Google Analytics" has been renamed to "Sitewide Settings".  You can still set your google analytics code here. (and it will appear if you previously set it), but you now can set MetaTags that will be applied to all the system pages that previously you weren't able to set MetaTags for.

If you don't know what MetaTags are for, don't worry.  You can leave these blank.  But for those with a desire to more deeply leverage Facebook's Open Graph metatags, and work on Search Engine Optimization in detail, there are now additional ways to set metatags in places you previously couldn't! 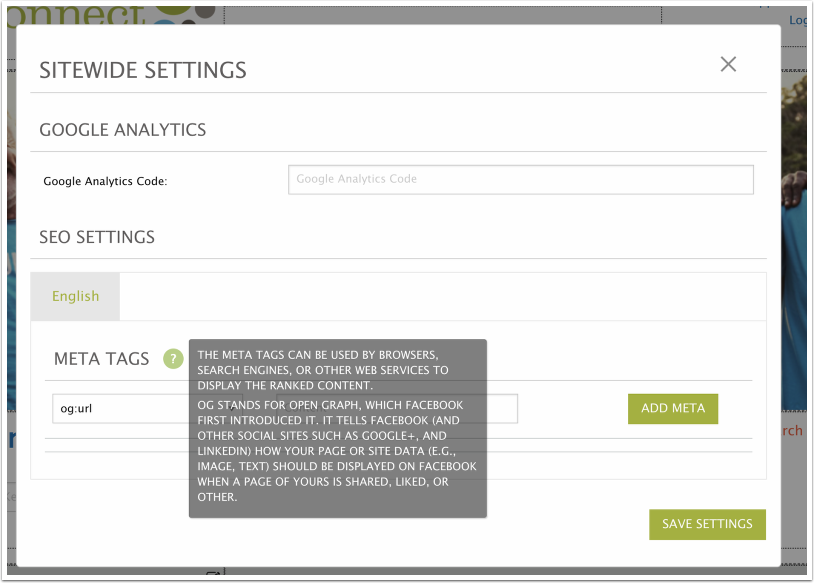 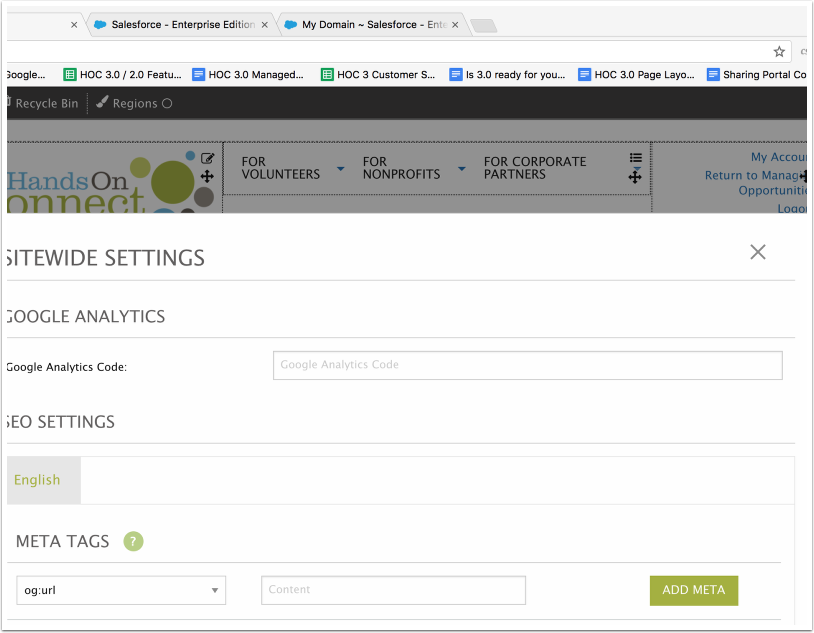 You can set site-wide settings for any of the following tags: 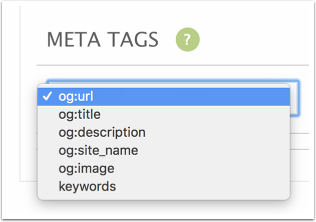 While you cannot edit the opportunity detail page content itself -- you CAN assign metatags that will be applied to these pages.

SO... for example,  if you want YOUR logo image to be accessed when clicking on the "Share to Facebook" link on the opportunity detail page, set the metatag for og:image to the URL of your logo.

For customers using the /searchresults block for search, the number of available slots was being displayed for ISO and legacy TBS opportunities.  Because this number is automatically set to be quite high (its really the number of allowed express interest connections)  - it was confusing to volunteers.   Slots available is not a relevant piece of info in the case of ISO or TBS opportunities.    So now 'slots available' will only be displayed for Date and Time Specific Opportunities as it is elsewhere in standard search.

Even though the Kiosk automatically resets after a few seconds to the home page after a person checks in, sometimes people mistakenly use the 'back' button in their browser to get back to the home page to check-in.  This can reveal the email address of the last person checking in.

So, we've added to the success page, a button labeled "Start new Check-In" which will quickly take you back to the kiosk home page. 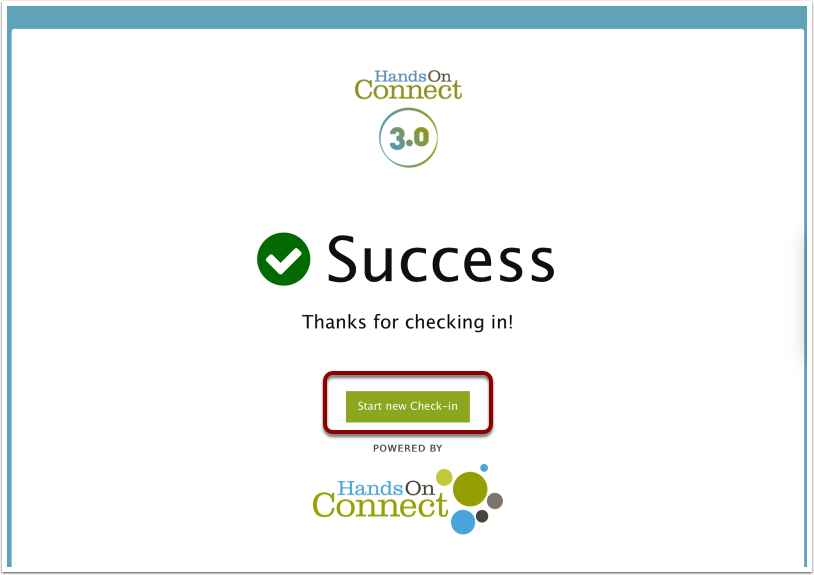