The February 2016 release will be made available to all HandsOn Connect clients during the one week release window of February 22-26. The release contains a number of bug fixes and improvements to new features that were part of the Winter 2015 release in December.

You'll know you've received the February release when the Feb 16 logo appears in the upper left corner of your instance of HOC.

Here are the details of this month's release:

A long-standing bug made search results based on an invitation code appears in the incorrect format.  A single opportunity would be listed multiple times - one for each occurrence.   Now search results are consistent with the normal search pages - listing a volunteer opportunity only once.  Clicking on the opportunity will display all its related occurrences as expected.

Fixed:  Volunteers who remove themselves from Express Interest confirmations, unable to sign up again.  (HOC 198)

Further improvements made to the flexibility that allows volunteers to 'change their mind' when they make a connection.  Volunteers who remove themselves from an express interest occurrence,  and then decide they really DO want to make the connection will now be able to sign up again.

In the "My teams" section, iff a team captain clicks on "Manage Team" iand then clicks on either "Remove Member" or "Make Captain" with no team member selected, a "Please Wait" dialog was appearing.  Now, instead of a 'please wait' screen, an appropriate error message appears. 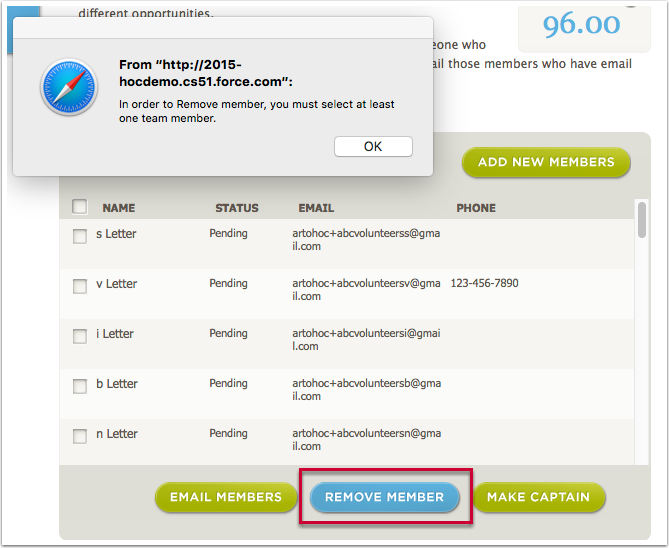 The Issue: -- Some organizations have reported that when changing the organization associated with a contact from Individual to another organization, or vice versa -- the Contact is sent an email notifying them that "A volunteer Account has been created for you".  This occurs even if the contact already has a volunteer account.  It can also occur when partners have their partner profile deactivated, and then they are moved to organization Individual.

Fixed:  Errors when logging out of public site (HOC-235)

Some volunteers have reported that they get an error message when logging out of a HOC public site.  Logging out should now safely return a volunteer to the home page.

These styles are now available in the new WYSWYG editor again - but have been renamed to "HOC Header 1" "HOC Header 2" etc....  They can be found in the editor under the format icon.

You'll now be able to select these styles again.  (Note: Your previous content and styles will not be affected by the name change in the WYSWYG editor for these styles).

For a full guide to styles that can be applied via the WYSWYG editor -- see this style guide. 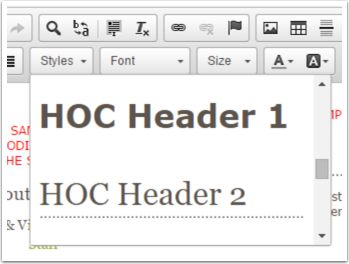 Fixed: Volunteer Opportunity Question answers not being captured when person connects as part of a team.  (HOC-244)

It was discovered that when a team member signs up for an opportunity as part of a team, and the opportunity had custom questions, the answers to those questions were not being captured.  This has been corrected.

Fixed:  Visualforce error occurring when volunteer uses "add to calendar" link and tries to add to to Icalendar or  Outlook (HOC245)

This was caused by a permission error in some instances, that did not grant appropriate access to the VisualForce page that generates the .ics file used by ICalendar and Outlook.  When you receive the release - this permission error will be corrected for you and volunteers. 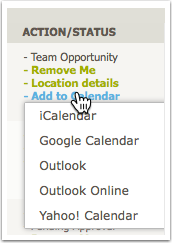 Fixed:  Improved display and appropriate functionality for Team History in "My Teams" (HOC246)

In the December release it became possible for Team Captains, even those not signed up for an opportunity, to manage the signups of their team members.  This can be done on the "My Teams" page.   It was discovered that this new functionality also inadvertently made it possible for team captains to edit the signups for past occurrences.  This has been corrected.

When looking at your team's history, you'll see all the opportunities they've participated in -- but the "Participants" and "Remove Team" links will only be visible for upcoming opportunities.  The rest, as they say, is history :-) 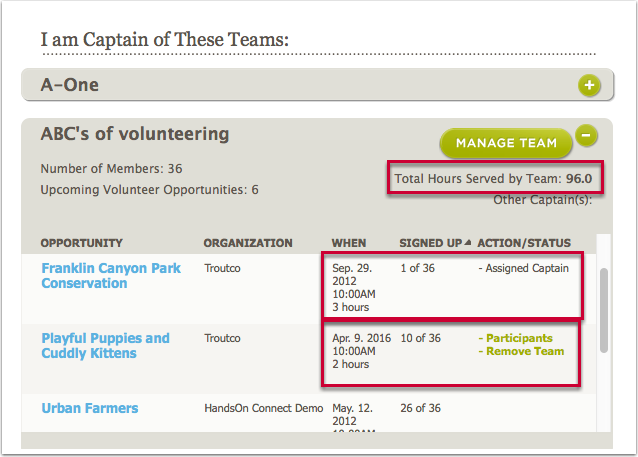 It was discovered that 'Populations Served"  filters that is now available in the "Advanced Filters" of the Volunteer Opportunity Calendar, was not using the same logic as the one on the Search page.  This has been corrected.  Only populations served that are associated with active opportunities will appear as choices in the list.

Fixed: Level 2 navigation disappears after removing oneself from an opportunity (HOC273)

When a volunteer removed themselves from an existing opportunity on the Account overview page, the 2nd level navigation became invisible!  This has been fixed!

The ability to remove oneself from an opportunity and then sign-up again was sometimes causing an opportunity to appear twice in a volunteer's "Upcoming Opportunities".  This has been fixed.

It was discovered that the embedded google map on the location detail page was not displaying on sites that had been upgraded to https://

This has been corrected and now Google Maps will display correctly whether the site is secure or insecure.

The share button volunteer opportunity detail pages was not behaving properly on sites that were upgrade to https://     This is because the 'add to any' widget used here integrates with an external, non-secure service.  This has been corrected so that site security is maintained.

Improvements to 'behind the scene' architecture

A handful of critical issues that appeared after the January release were quickly patched and fixed prior to this release.  These included some Visualforce Errors that were experienced on the public site, and some issues affecting logins. These are already corrected for all instances of HOC.

A number of issues in the architecture of HandsOn Connect have been addressed in this release that will improve overall responsiveness and functionality of HOC.   Groundwork has also been laid to support some of the new features for next month's Spring 2016 release.

We continue to add improvements to search responsiveness and are have further isolated the occasional behavior where the current day's projects on the calendar do not appear as expected. If you experience an occasion where the current day's projects do not appear  as expected - please open a Zendesk ticket in urgent status so we can observe this during the short window in which it is occurring.  Thanks!